The speed and cost of sending money around the world have fallen in the past few years. This trend has happened mostly because of the recent advancement in technology and the rising competition from local and international companies. In this article, we will look at some of the fastest ways to send money internationally.

One of the fastest growing industries in fintech is on money transfer. Indeed, in the past few years, companies like Wise and WorldRemit have moved from mere startups into large multinational companies worth billions of dollars. Other smaller firms like PaySend and OFX have also had similar growth.

This growth accelerated in 2020 during the global pandemic as more people stayed at home. To send money globally, most people used their mobile wallets that are usually easy and fast to use.

Other new companies use advanced cryptocurrency technology to process the payments. After initiating a payment transaction, the firm will convert the funds into a cryptocurrency and deliver it to the recipient. The recipient can now withdraw the funds using the app.

Another fast way to send money around the world is to use digital currencies like Bitcoin and Dogecoin. These currencies are only available online and are most popular among young people. Although they are highly volatile, the process of sending the digital currencies is relatively simple.

You just need to create an online account with a leading exchange or wallet, buy a currency, and then send it to the recipient. After doing that, the customer can instantly withdraw the funds into their account.

There are thousands of cryptocurrencies that you can use when sending money internationally. Some of those we recommend are Bitcoin, Litecoin, and Bitcoin Cash.

Western Union is one of the oldest money transfer companies in the world. For almost two centuries, the company has helped people send money globally within minutes. The firm has also made agreements with most banks and mobile money companies.

While Western Union is a traditional company, it has been evolving. Today, the company has a feature known s Money in Minutes, which allows the recipient to receive money within a few minutes. They can pick the funds at a local agent or have them directly deposited in a bank or mobile wallet. Other alternatives to Western Union that offer similar services are companies like MoneyGram and RiaMoney.

When sending money abroad, you ideally want to use an option that is affordable, efficient, safe, and fast. In this article, we have looked at some of the top options that you should always consider when sending money around the world. For further reading, MoneyTransfers.com explains some of these elements in more detail. We have also looked at some of the benefits of using these options to send money and how you can save money by using a comparison platform.

7 foods that help you look and feel younger

Personalised Gifts For The Home

Ways to Accessorise Your Dining Table

Mapped: The Most Privileged Nations in the World 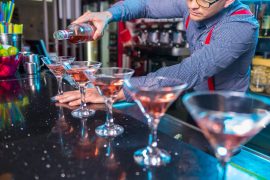